I feel like that has been the theme of the last couple months.  Where the eff did all the time go?!?!  Today, after spending the weekend cleaning my house from top to bottom and FINALLY getting out for a ride on my motorcycle (don't worry Nan, I went REALLY fast the entire time!) I decided I should sit down at the sewing machine.  I have no idea why, but its the thing I have felt most weird about doing since I said goodbye to Moosh.  Maybe cuz it was the thing in our house that caused the most interruption in my paying constant attention to him.

Anyhoo, I cut out all the pieces for this months block about three weeks ago -- and let me tell you, there are about a trillion pieces in this block.  There were 16 squares that measured a mere 1 7/8 inches.  That's crazy small.  I sewed the HST units about two weeks ago. 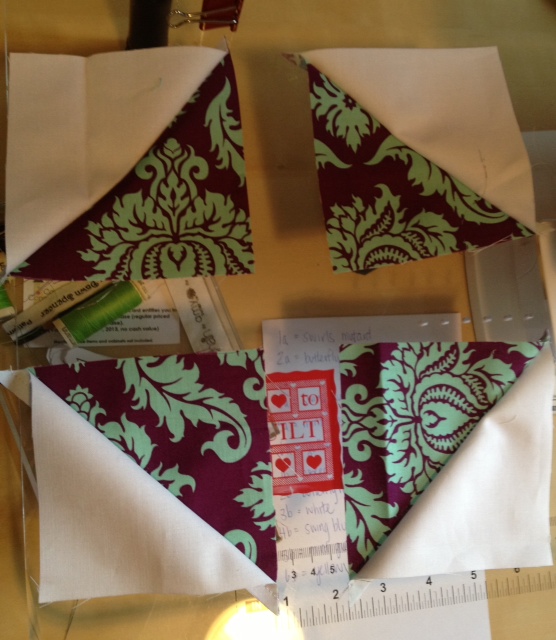 Then, I think I was prepared for the rest of it to be way more complicated than it actually was.  I was a bit put off by those really small squares.  Tonight however, when I ran out of other things to do, I finally sat down to finish it.  Especially since Amy from Stichery Dickory Dock says there's something interesting in the pipeline for those completing the June block (gotta get on that one).  Here she is, all done up:

Oh ya, and that show that my friend was in that I made the suit for?  Here's how it all looked on stage:

Not too shabby right?!?  Well, seems like we're onto the next one already -- apparently going to do a show in Windsor in September.  I'm making a new suit for that!  I have already thought of the improvements I can make over this one!