Yup - that said April.  I can admit that even though its ALMOST June I've fallen a bit behind with the Lucky Stars Block-of-the-Month.  Sheesh.  I mean, I finished the Keystone Lodge quilt, created my friend's competition suit and made a shirt.  I'm giving myself permission to be behind.

Since I hadn't worked on anything for this BOM since March Break...I felt like I was starting over.  I had to remind myself of every step.  I.e., step one - cut out the templates:

Step two is the hardest part.  This is where I have to audition my fabrics and figure out what the heck this thing is going to look like when its all finished.  It involves creeping flickr to see what other people have done and trying to fold my mound of fabrics into a shape that somehow mimics what the finished block will look like.
Also, I'm a bit out of paper-piecing practice.  I kept screwing up the first square as right side out and then fitting the others as right side in.  I think I might have had to rip five different seams today.

I finally got all 8 of the templates made and sewed the triangle shapes into square quarters.  Then I had a choice on my hands.  There were two options for putting together the block.  Option one was this:
Option two was this:
I ended up initially thinking I was going to go with the original design but once the block was laid out - I shifted thinking.  I was totally jazzed about the second option.  So that's the way I put it together.  Hey Buttons, you want to examine my paper-pieced points? 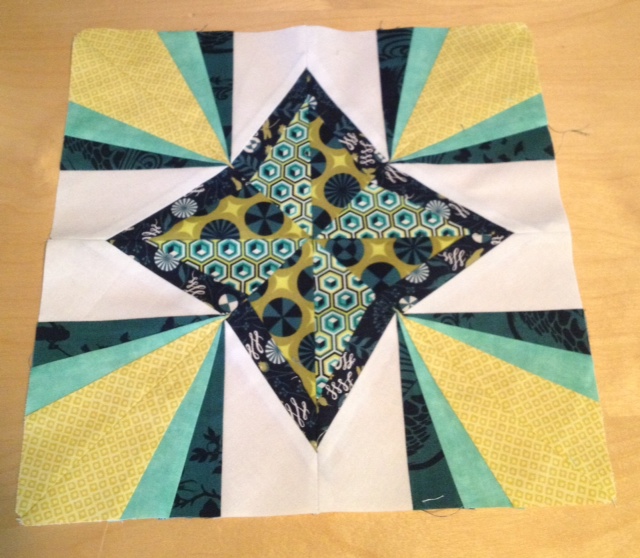 And finally, because I need to be inspired enough to finish my May block before June hits, I took a picture of all my months so far so I could get a check on my progress.
I think I'm REALLY going to like this quilt once I get all the blocks done!
Posted by Crissa at 16:51 1 comment:

I made a shirt!

A couple Saturdays ago, I hooked up with a quilty friend of mine, Marie.  Some time back in March she had offered to teach me how to garment sew and we finally reached the date we had pre-arranged.  Now, I've made quilts, but I had never sewn a garment.  I figured this was excellent timing, given that I would be sewing that competition suit around the same time and could (hopefully) apply some of her pointers.

We picked out the pattern and fabric (from the clearance section - yay!) on Friday night and hung out all day on Saturday while she taught me what to do and cooked me a delicious salmon lunch.  I have to admit, when things started to look like this.... 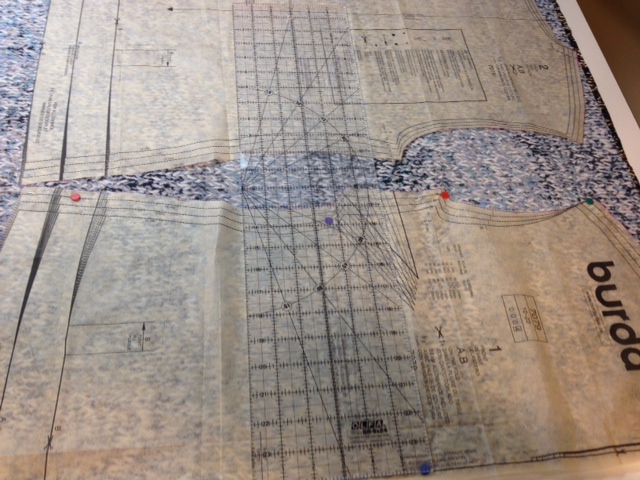 ...I didn't think there was much hope for me.  Cutting patterns is WAY different than cutting randomly sized rectangles and squares for quilts!

Anyhoo, after the awesomeness of finishing the competition suit, I was able to finish up the work I had started on that Saturday.  I finished putting the binding on the arm holes, sewed the sides, and then hemmed the bottom.  And Voila! 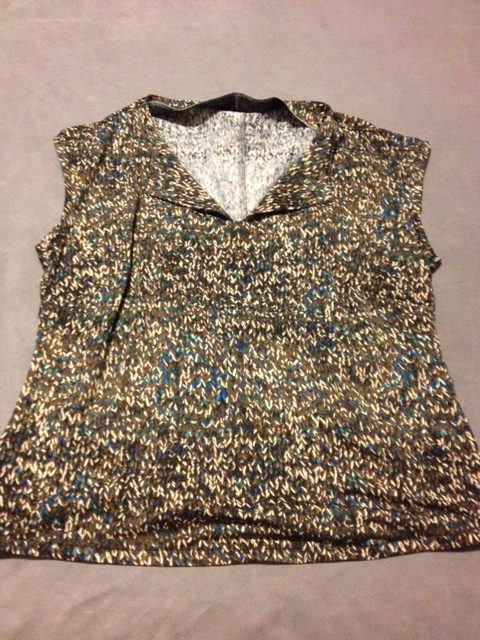 I made a shirt!  Not gonna lie, people.  I bragged about this bad boy EVERYWHERE today.  Ha.
Posted by Crissa at 17:04 1 comment:

I finished the sewing of the suit on Friday night - it was surprising how easy it went together.  So surprising in fact, that I had a hard time believing it was going to actually fit my friend.

Of course, as soon as I found out she was in Mississauga the next day, I asked her to come over and try it on in case I had something massive to fix.

So the next challenge was deciding how to sparkle it up.  We started with photos that my friend sent me of suits that she liked.  Then we checked out google images (I searched figure competition suits), and finally decided to hit up Pinterest.  There are a PILE of options. Who knew there were so many different ways to crystallize these things!
Monday was fin-day!  We probably put almost 750 stones on this thing today.  We got the top totally finished and did the waistband of the bottoms.  Each stone was individually. Glued. On.   My fingers hurt.
Anyway, we just have to finish off the bottoms, that's the project for next Saturday.  This means any sewing I get done for this week is ALL for me!  YAY!
Posted by Crissa at 19:35 1 comment:

Alright, its been CrAzY busy around here lately.  I helped plan and then attended a conference for my work group, end of the year PD has been happening, I'm trying to build a timetable and then I got sick.  Boo!  I think that much of this crazy however, was an effort to avoid doing a couple of really scary things.

The first thing was that I needed to do was learn how to use my hand-me-over serger that I got from my awesome grandmother (shout out Nan!).  I've been messing around with it a little to get comfortable but it still had the four cones of brown thread that it came to me with and I have been way too scared to attempt to change it.  Look at this:

I really think if the machine is going to be this complicated, it should come with a man-servant to change all the threads for me.  Then I might sew full time!  So I read the directions about 50 times and followed all the threads through to get it down pat.  Then I changed them to new threads.  This is what happened:
So once I got the serger thread changed, I was off to the races with my next project -- making a competition suit for my friend who competes in figure (read body-building but slightly less intense) competitions.  She is coming up to provincials on June 1st and asked me to make her suit for her.  Uh.....no pressure, right?  So I have never made garments of ANY sort before (except for most of a shirt that I started last weekend with a sewy friend of mine named Marie).  Nothing like biting off way more than you can chew.  I also have no pattern and am working from her old suit which I took apart.  If I screw this up, I am in BIG friendship-ending trouble.   Most of the suit is serged first with elastic, then the elastic areas are rolled under and zigzag stitched.
I'm getting this puppy finished by Saturday night so I can start to add the jewels.  Bedazzle style!  Should be a fun process...except for the fact that I need my friend IN the suit while I glue crystals to her boobs and other lady-parts.  Its a damned good thing we've been friends for so long.  No shame, right?

Inspiration and catching up

Um....what the heck happened to April?!?  Jeez Louise.  My springs are always busy but I feel like I lost a whole month in there somewhere!

I'm behind on the two BOMs I'm registered for.  Yikes!  I hate being behind.  I had to start  catching up.  So I did....today.  You know, after volunteering at and visiting the Brampton Quilt Guild show yesterday and cleaning my house from top to bottom.  I have actual work to do - you know, the kind from the job that I get paid to show up at every day.  I think I'm procrastinating.  The report I have to write is a bit of an unsavoury task.

Anyhoo, I took some pictures of an ultimate skill I would LOVE to develop.  I definitely don't think I'm there yet...but one day.  Look:

To me, this is SUCH talent.  I'm still in the squares, circles, and triangles phase of my quilting life.  I can't even imagine being able to turn fabric into these amazing pieces of art.  One day though.  One day.
Anyhoo, I got home yesterday afternoon and figured I would get some sewing done....you know, after I tackled my house cleaning.  But then it was too late so I saved it for today.  I finally got the April block put together for the Sugar Block Club.  I wasn't too sure my fabric selections would work out but I have to say I'm pretty happy with the end product.
And here it is with my progress so far:
I guess now I'm off to do the darned no-fun-report.  I really need to win the lottery.