...I LOVE Christmas.  More than anything else.  Okay.  Except coffee.  I REALLY love coffee, but I digress.

I look forward to the Santa Claus parade every year because that's the day CHFI begins to play Christmas music 24 hours a day.  Christmas lights make driving anywhere loads of fun, everything in public looks a lot prettier all jazzed up for the holidays, people are nicer, and I get to buy peppermint mochas at starbucks.  Yippee!

This year, I am making two (yup, still determined to make a matched pair) Christmas Tree quilts.  I was home sick for a chunk and so I was able to get some work done on them in between napping and wanting to rip my own ears off to escape the pain of my sinus infection.

Remember this?
Well, over the course of the last week, they became this:
Getting all those pieces into tree shapes got to be highly repetitive and mindless.  I settled into a rhythm of sew, slice, press, sew slice, press some more...all while I rocked out to Christmas jams on my radio.  Epic.

And I can admit, I'm pretty obsessive-compulsive and neat when I sew, but after 384 corners, I was tossing ready to press tree-bits in a gigantic pile.  There was no neatness happening.

But before long, progress was palpable.  Trees began to take shape and I began to get super excited.  I really love the fabric I used.  Its Blitzen by Basic Gray for Moda and I would coat my whole house in it if I could.  So pretty soon this.... 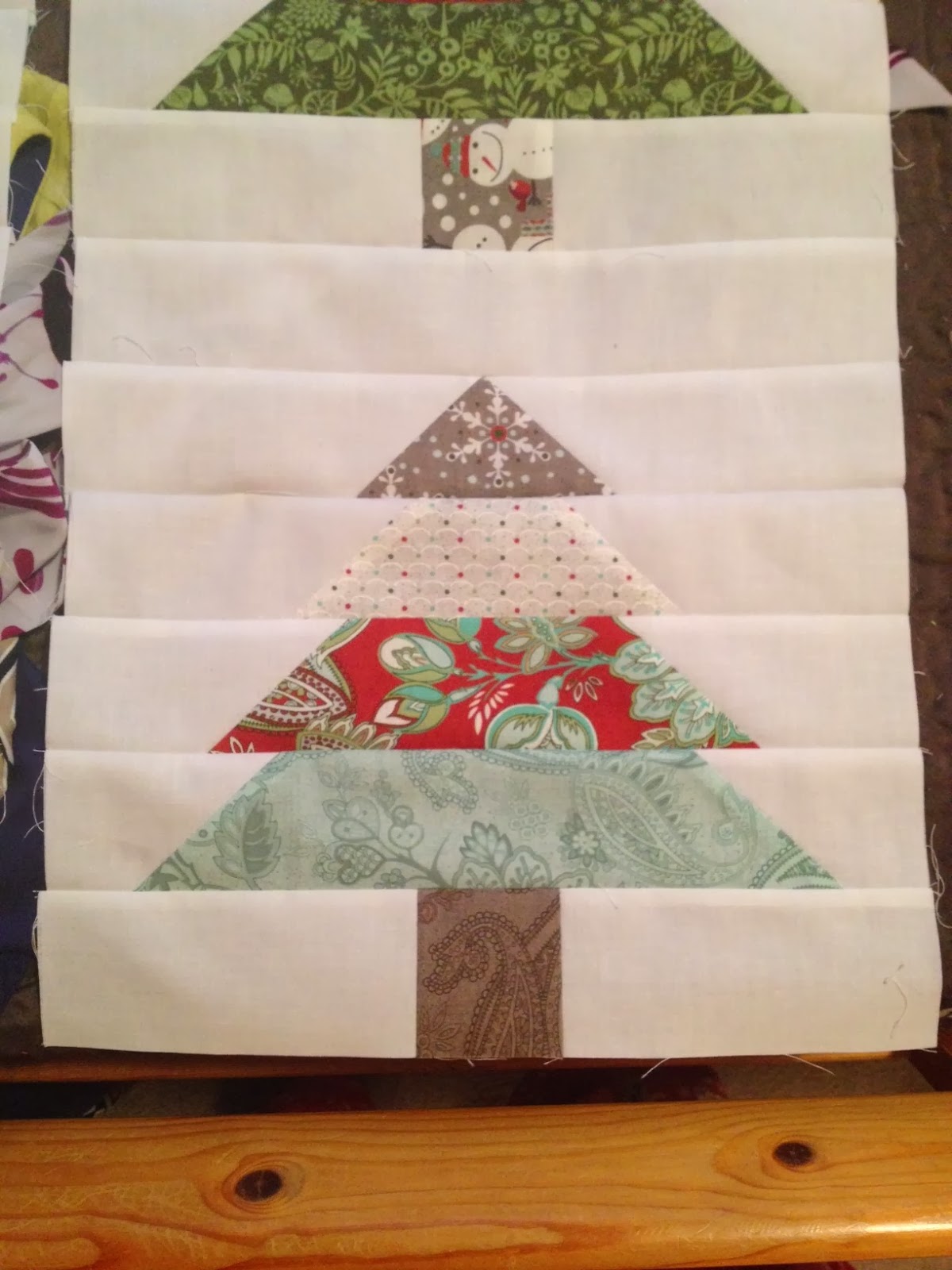 ...became an official forest!  And once I got to that point, I couldn't stop.  I had to see this thing through!


And soon enough....
The intention is for these to become a couple of Christmas gifts so I can't lose any of my momentum or excitement or I might not get them completed in time.  I aim to have the tops done by the end of this weekend.  It may be a lofty goal and I might, in fact, not achieve it.  However, the pieces for the second top are finished and after I lay it out, it feels like it goes together pretty quickly.  Then I have to get the backings together and.....yikes....the quilting!  I feel like I just want to do a looser loop-de-loop all over both tops.  I hypothesize that doing that will speed up the whole process - but I may just be crazy.  And a bonus - binding it doesn't scare me so much any more.  I think I'm getting faster and once winter sets in, I can huddle under the quilt while I bind it.  Score!
Posted by Crissa at 15:31 No comments:

I was hanging out, chillfully (like cheerfully, only more relaxed) reading a book and I heard a crash.  After I got over the initial trauma of believing I was the victim of a horrible home invasion, I found the source of the sound.  There had been a fabric tsunami which swept through my closet and left a horrible mess in its aftermath.  Boo.  Something to clean up.

Have I ever mentioned how much I love fabric?  Like love.  L-O-V-E.  Like I love it so much I subscribe to newsletters on-line which highlight the new fabric lines coming out for me.  I walk into a store and can sorta tell how old the stock is based on the fabric.  I have a problem.  I didn't know it was a problem until my storage solution collapsed.  Literally caved under the weight of metres and metres of fabric I bought - not for a particular project (or series of projects) - but for the sheer joy of being able to look at how pretty it is.

When I finally mustered the courage to tackle that pile I got this:
Maybe I need to go on a fabric fast like my friend L.  Or maybe I just need to have a custom closet solution installed.  Hmm....I pick option number two.
Posted by Crissa at 17:30 No comments:

Email ThisBlogThis!Share to TwitterShare to FacebookShare to Pinterest
Location: Mississauga

Biting off more than I can chew...Christmas editon

I can admit it, I have a hard time saying no --  I think obligation is important and it IS nice to be a person others can rely on.  This usually isn't a problem.  However, I am also incredibly ambitious.  This becomes problematic at Christmas time when it seems like there is less time and more to do.  I got this idea to make a couple of similar/same Christmas themed twin sized (or generous couch sized, as I like to call them) quilts for a couple of friends of mine.  Given that the Santa Claus parade was this weekend, its probably a good time to get started.  Eeek!

So I figured that I would cut out all the fabric for the whole she-bang all at once for two reasons: first, cutting is kind of a pain in the ass and I make a big mess; and second, this way I will HAVE to finish (I'm already tricking myself and I just started....this does not bode well).


At this point, in a caffeine induced haze, I still believed it wouldn't be THAT much work.  Lol.  Then I cut out the background fabric.  Total game changer.  Total.

So I got the strips to make 24 trees all assembled.  All I have to do is sew these strips together.  Oh, you know, and then do it all again for number two.  If you need me, I'll be in my sewing room....till Christmas.
Posted by Crissa at 18:32 1 comment:

Have I ever mentioned my least favourite part of the quilting process?  Binding. Not gonna lie people, I legit HATE sewing down binding.  Admittedly, I hate it less than I used to - my Grandmother showed me a faster way to stitch.  But I still hate it.  Alas, it has to be done.  I have had the quilt finished for...hmmm....closing in on two years I think.  It sat folded on my printer (or the almost finished stuff shelf, as I like to call it) but this weekend's upcoming visit from the Aunt it is intended for means I had to bite the bullet.  Damn you binding!  First step -- using my super cool new wonder-clips to hold the binding down.

Then, the detestable part.....hand-sewing.  Ugh.  Seriously, its a wonder I can type right now.  It feels like my fingertips are bleeding.
And finally, after spending most of yesterday and then from about 5 till now doing the hand sewing, I got it all finished.  The result:

And also, just because its Remembrance Day, I wanted to share a couple of pictures of my Grandfathers - both veterans.  Thanks Grandpa and Bub for your sacrifices in honour of freedom.  Lest we forget.