So pretty good year in the creative department considering I have been in thumb jail for the last four months.  It feels good also to track my progress.  I had no stated quilty goals for 2017 so everything on my list here puts me over and above all expectation!  Lol.

I'm breaking things into sections for this review...

New Skills:
I like to set myself a goal to learn something new every year.  As examples, past yearly learning goals have included getting a motorcycle license, learning to knit, and taking Spanish lessons.  This year, I learned two new sewing skills.

The first was English Paper Piecing.
The second was to draft a Foundation Paper Pieced block:
Cushions:
These are awesome little projects to make you feel like you accomplished something in a relatively short amount of time.  In other words, great projects for a newly minted high school principal with not a lot of time on her hands.  The first was a gift.
The second was my sneaky attempt to convert my brother's girlfriend into a quilter.  Note: it didn't work.
The third was to use up scraps for the first quilt I was paid to make.

This was a pretty good eight months worth of effort.  Got a little sidelined in the fall with an injury but I will be right as rain again soon!  This was a last minute gift for a new baby boy -- got the call on Friday that I was going to get to meet him on Sunday and went to work.  36 hours later...BAM! Fast finish! 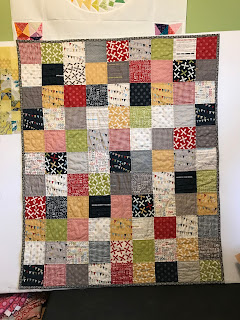 The second was the recently blogged birthday quilt for my friend and VP partner K-Dubs.
And the third was my long awaited aviatrix which was always destined for me and which has lived happily on my bed since it was finished.
Other progress:
I also made a dress this year in an attempt to keep making progress on my garment sewing skills.
And I finished a few quilt tops which will quickly be making it into the 2018 quilty finishes column.  The first was the snail quilt I made as part of an instagram sew-a-long with my friend L.
The second is destined for my brother's girlfriend and which WILL be a finished quilt by the time school starts again on January 8th.
And the final top - also which WILL be a finished quilt by January 8th is for the new grandson of someone who works in my school.  This little guy had a rough go in the first few weeks of life but is getting stronger every day.
And that's it!

I've never set intentions for the year ahead but looking at this list of accomplishments from 2017 makes me kind of want to.  Who knows, I just may.