And that's a wrap!

I have a finishing problem.  Well...not really a finishing problem - it can more aptly be described as a not-having-the-degree-of-expertise-I-want-so-I-put-it-off-for-forever problem.  What seems like a gajillion years ago (but which is actually about 22 months ago) I started a 40th birthday present for my friend Brenty.  He the best.  He's like a living cartoon character...or a muppet.  The big brother I never had.  Anyhoo, I bought all the fabrics and cut them all up and planned out this quilt with a little help from the birthday boy.

I got to this point VERY quickly: 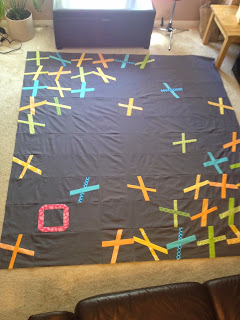 ...um....and then it sat there....and called to me....and mocked me...and I ignored it....until Brenty started whining.  Nothing lights a fire under your ass like an almost 42 year old who whines that its almost time for ME to turn 40 and he doesn't have his quilt yet.  Jerk.  :p

So I buckled down over the last couple of weeks and finally finished it!


I attached the binding by machine.  It follows my rules for quilting -- boys, kids and dogs get machine done.  They don't care that much, right?

And there you have it!  Hi-Jinx.  A quilt for Brenty.  May his next forty years be better than his last.  I'm officially back in the quilty saddle.