I feel like this whole finish-a-long thing might be really good for my sew-jo.  I've already finished one of my goals -- and it's only been a week!  All it took was the previous posting of a seriously aged WIP (as in - it may have been old enough to get married and have quilt babies).   So I dug out a couple of almost finished quilt tops and then knowing they were sitting there, and knowing I was now obligated to get them done, finally lit a fire under my ass.

This quilt was something I had intended for a friend pretty early on in my quilting journey.  Unfortunately, I got...well...a little distracted by everything else available out there in the quiltiverse and so I never quite finished it.  A little motivation though, and it seemed to take care of itself.

This is not necessarily the quilt I would begin now -- there's not as much negative space as I find myself liking -- but its still cute.  And given the recipient's affinity for dark colours and leather, I think it will suit her space.   And the border?  The plain fact that there is a border at all?!?  Yikes!

So I'm calling this quilt "Puppy Love" and giving it to one of my closest friends.  Her name is Sydney (she's the one I make competition suits for -- a.k.a. blinged up bikinis) and she has a SUPER cute new golden retriever puppy named Henry.  Well, he's not SO little any more -- he's now a 38 pound 4-month-old. 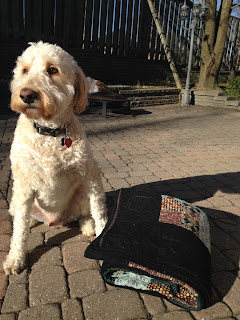 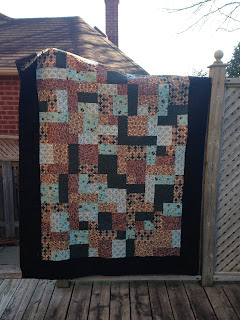 So that's one of my three goals achieved!  Yay!  And I still have two and a half months to go!  Woohoo!